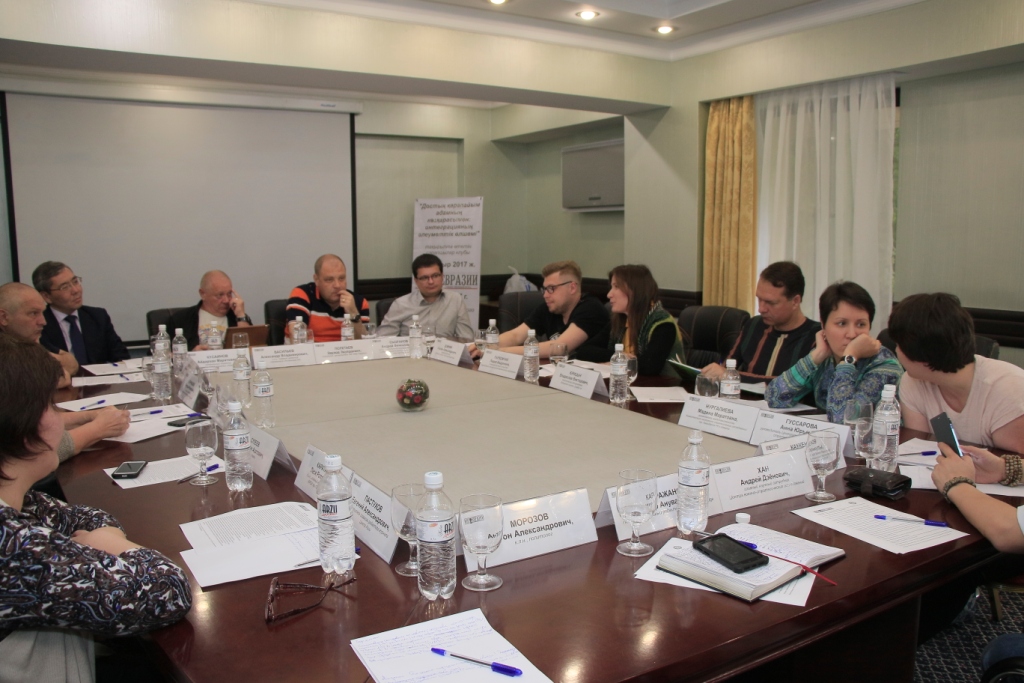 An international meeting, whose theme was “Friendship as Perceived by Common Person: Social Aspect of Integration”, has taken place in the city of Almaty (Kazakhstan). Kazakhstani and Russian experts took part in it.

The meeting united political observers, historians, sociologists, journalists, and public figures. The event was arranged by the Public Fund “World of Eurasia” (Kazakhstan) and by the Center of Eurasian Political Research of Astrakhan State University (Russia). Dr. Andrey Syzranov, Chief of the Center of Eurasian Political Research of ASU, and Mr. Alexander Vassilyev, Editor-in-Chief of the Astrakhan 24 TV Channel and a political observer, represented the Russian party.

The Russian and the Kazakhstani experts discussed issues of social integration and its influence upon economic partnership between the countries of the Eurasian Economic Union.

In his turn, Dr. Andrey Syzranov remarked that economy would always play the main role; however, economic goals of the Eurasian integration cannot be achieved without considering the social aspect. “People take part in integration processes, and any social model is certainly an essential part of integration. We all are different people; each nation has its own history, culture, and mentality. Development of solidarity and cooperation between peoples, respecting their history, culture, and traditions – this is the way to a gradual integration, to a single integrated viewpoint on relations between the post-Soviet countries”, the expert pointed out.

As for Mr. Alexander Vassilyev, he mentioned real examples when disunity between the former Soviet countries, which took place right after the collapse of the Soviet Union, and absence of social links resulted in serious problems for former Soviet citizens. He said, “I know cases when citizens, who worked in the Kazakhstani city of Atyrau all their lives, could not confirm their work experience officially and received a very small pension in Astrakhan after the two countries had separated. The social sphere is very sensitive to any considerable changes in economy and in policy; so it is essential to assess and foresee its efficiency and probable consequences of any decision taken to support integration processes”.

Mr. Aydarkhan Kusainov, General Manager of the Almagest Consultancy, remarked once again that no tasks related to social integration were set when the Eurasian Economic Union was established. “This is merely an economic union; in addition, citizens of the participating countries could travel across borders with minimal problems. There was no question of values, so it makes no sense to measure social integration in the EAEU from the formal viewpoint. Besides, the term “social integration” is associated with pensions and sick lists, whereas we speak about something greater than that; so I think it’s more suitable to mention public integration that implies similar views and beliefs. At that, we can’t strive to a full coincidence, as each country has its own priorities and specifics, but there must certainly be particular points of contact”, the expert remarked.

Prof. Rustam Burnashev from German-Kazakh University (Almaty, Kazakhstan) expressed his views on social integration as well. He said that to establish social integration properly, it is necessary to pay attention to the social sphere of each of the EAEU countries. One should not try to improve the international sphere when the domestic sphere is far from being ideal. This concerns each EAEU country.

Prof. Lesya Karataeva, Chief Researcher of the Kazakhstan Institute for Strategic Studies under the President of the Republic of Kazakhstan, believes that one should not strive to a complete unification of social rules in the EAEU. Yet, it would make sense in some cases, as population migrates and faces problems: “One should pay attention to procedures of submitting documents from a country to a country to avoid problems with pensions and other social benefits. As for information policy, a number of researchers analyzed the Kazakhstani people’s attitudes to the Eurasian integration. It was interesting to find out that in general, people of Kazakhstan treat it positively, but at the same time, they have a poor understanding what it means and what benefits it could provide. Information policy of each country is not ideal; integration ideas are promoted poorly; there is an acute shortage of interesting and inspiring general human histories. I think it is necessary to develop information support of integration ideas so that they were useful for common people”.

Mr. Adil Kaukenov, General Manager of the China Center, which is an international center of cooperation between Kazakhstan and China, thinks that any citizen of any EAEU country should be aware of the meaning of Eurasian integration: “Integration is performed by people who see problems – first of all, at the border customs, in vigorously changing laws and regulations for international business, in limits, restrictions, and charges. It’s crucial to state in public what we expect from this integration”.

Ms. Lidiya Parkhomchik, a key researcher of the Eurasian Research Institute, remarked that the sociological surveys, which the Eurasian Development Bank – a Eurasian barometer of the post-Soviet countries – conducts on an annual basis, reveal the respondents’ positive interest in Eurasian integration.

Mr. Sergey Domnin, Editor-in-Chief of the Expert Kazakhstan business magazine, pointed out: “We are repeating the same mistake – we’re always speaking about relations between Russia and Kazakhstan. That’s of top priority for us, and we’re constantly thinking about those relations. If we consider with social links, we should identify the tools of those links. The main communication tool is the Russian language”.

Summing up the expressed viewpoints, the moderators remarked that proclamation of ideas of social and economic progress should be applicable in practice. However, there are some setbacks to meet the goals and tasks of social policy owing to crisis phenomena in the world economy. Development of the model of social interaction between different countries is a lengthy process, which is achieved not by speaking and speculating about its importance in general, but by providing real social guarantees: people ought to be aware that their interests will be recognized and respected.