Philosophical Congress: about Humans & for Humans 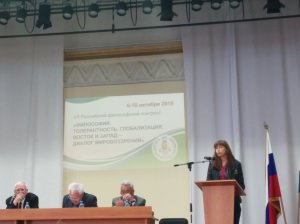 Professor Lyudmila Baeva, Dean of the Department of Social Communications of Astrakhan State University, has told us about her recent participation in the 6th Russian Philosophical Congress “Philosophy. Tolerance. Globalization. East & West – Dialogue of Worldviews”.

“The Congress that has passed in the city of Ufa has united about 1, 500 scholars from Turkey, Spain, China, Israel, Belgium, Kazakhstan, Kirgizia, Tajikistan, Iran, Uzbekistan, Azerbaijan, Bulgaria, Ukraine, and Russia. This event is held every four years; it is arranged by the Russian Philosophical Society, whose Astrakhan Branch has been chaired by Dr. Leonid Podvoyskiy, an Associate Professor of our Chair of Philosophy, for a number of years.

The main reports given at the Plenary Session have concerned globalization issues, a complicated situation in the world owing to large-scale migration and to the current war in Syria, and so on. Academician Vyacheslav Styopin, President of the Russian Philosophical Society, has opened the entire event; he has identified the main philosophical issues to be discussed at the current Congress. Crucial social and political issues have been under consideration in the speech given by Mr. Mehdi Sanai, Ambassador Extraordinary and Plenipotentiary of the Islamic Republic of Iran to the Russian Federation. The speech by Prof. Dr. Ioanna Kuçuradi from the International Federation of Philosophical Societies has also been of great value for the Congress participants; it has concerned issues of tolerance and human rights in various countries of the world.

I have been a co-supervisor of the section in Philosophical Anthropology, together with Professor Boris Markov from Saint Petersburg State University. We have discussed issues of the human internal world, human values, meaning of life, as well as spiritual and biosocial development. Issues of transformation in the human nature owing to expansion of the media space, gender changes, application of cyber-technologies, and profession-oriented development of human personality have been of special importance at our section. We have also analyzed and discussed homo militaris (that is, humans under military service conditions), technocracy-impacted humans, and so on.

Participation in such a Congress is not just listening to scientific reports; it is also productive communication with your colleagues. During our roundtables, we have discussed teaching Philosophy, in particular – teaching large groups of our students by applying innovative techniques at Astrakhan State University. Humanitarian education requires careful attention, so I got a positive feedback from my colleagues about our experience in this field.

A session of the Educational Methodical Association headed by Professor Vladimir Mironov, Dean of the Faculty of Philosophy of Lomonosov Moscow State University, has taken place as a part of the Congress agenda. It has concerned application of standards for bachelor, master, and PhD programs in activities that universities perform, as well as increasing one’s citation index and participation in various international projects and programs. It has been pointed out that the humanitarian community in our country has a rather low citation index rate if compared with exact sciences, so we have emphasized that not only classical philosophers, but also one’s colleagues ought to be cited actively in one’s research papers. I cannot say that this issue is so acute at our University, but anyway we have to pay more attention to that.

A critical attitude to evaluation of the current events in the educational system has dominated at the Congress, in particular – to the turnaround from humanities to exact and natural sciences; many critical remarks have been uttered at the section meetings. On the one hand, expansion of technocracy in the modern society, the present-day value shift from social and ethical values to material, technical, and economical ones is an objective process; it does not depend on us. The educational system is changing its accent from general education to particular specializations, and the outcome of this phenomenon might mean that we would get a specialist whose knowledge and values are limited within their professions, a specialist who is unaware of the interdisciplinary context, who is not society-conscious. Despite all the current events, our population’s degree of patriotism is rising; but, as the latest sociological surveys indicate, people trust the government less and less, and their political activities are declining. Social life is substituted by private life; everyone thinks only about his or her own needs and interests. Such a situation might affect any society. The system of values must be formed purposefully, not spontaneously; studies of History, Philosophy, Sociology, Political Science, and Ethics at secondary schools contributes to that. To suggest a solution to all these issues, the participants of the Congress have come up with an idea to introduce new, up-to-date disciplines into school syllabi. The range of such disciplines may include Information Space Ethics, Virtual Space Communications, Fundamentals of Regional Cultural Security, and so on.

In general, one could say that whatever issues are discussed at philosophical congresses, conferences, and symposiums, a human being has always been and shall always be within the very focus of any discussions”.